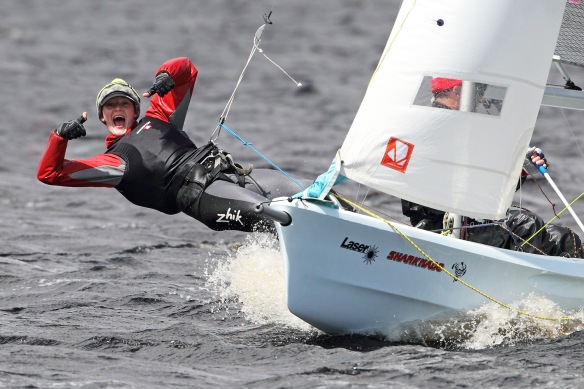 Well hello to you all from my comfy sofa in front of a log fire – a stark contrast to the winter wonderland of the Yorkshire Dales Sailing Club where I, my frozen digits and partner-in-crime reside when aboard the faithful ship, ‘Sharknado’.

If you were present at the Vago AGM back in mid-October, you’ll know that the role of Chairperson has finally changed hands after 6 years (possibly to the relief of former chair, Ed Deacon). If you weren’t present, it’s me; Kate Mellor!

I’ve been crawling around boats since I were a nipper, but am a fairly recent new-comer to the Vago class. I was introduced to the Vago when I returned to my home club of Yorkshire Dales SC back in 2012. The Tigger-like Northern Liaison Officer bounded across and asked on a particularly windy day if I wanted a blast across the reservoir in an asymmetric. The boat didn’t half shift and we barely had half the boat in the water – what a blast and what an introduction to the boat! A year or so later the trips out in the Vago became more of a regular occurrence, rather than my ‘windy day alternative’ and myself and Dave Baxter started putting in the hours practicing, rehearsing, ‘discussing’ and perfecting techniques which paid off in 2015 when we attended my first Vago National championships and won! Top job! It’s been onwards and upwards practicing and trying out new helm/ crew combinations which recently (October 2016) included my first solo trip out, trapezing downwind with the kite up.

As far as committees go, I’ve dabbled in club committees and have heard the ramblings of a Chairperson from another Class association so I like to think I might have a bit of an inkling as to what to expect.

I want to thank Ed for all his efforts for the past 6 years with the Vago class, and his helping hand whilst I get settled in with the committee – not much settling to do though as all the Vago members are very friendly and welcoming.

I am already busy helping plan the Vago events for next season, along with the other members of the committee – so plenty to look forward to next season – onwards and upwards!